The “Super Imploder” water treatment device produces a measurable and validated effect on plant growth, seed germination success, and biomass yields. It is unique technology that combines a magnetic array with a directional nozzle. The Imploder device facilitates the bringing of required nutrients into plants by causing a de-clustering effect on water. The ‘absorption efficiency effect’ and ‘redox potential’ has produced independently validated measurements of approximately 328% plant growth increase along with biomass density.

The Imploder is based on phase conjugate HYDRODYNAMICS (liquid implosion) COMBINED with PHASE CONJUGATE MAGNETICS.. where the LIKE or SIMILAR poles of the Magnets ATTRACT each other.

The extreme converging magnetic flux lines – create the centripetal inertia at the liquid molecular level – which creates the spin cycle of the wash machine – sorting by mass. Resulting in the increase molecular order and spin density.

What is the Science Behind the Imploder?

The science of water is becoming more complex and surprising all the time. It is not just a single homogeneous substance that we have thought it to be. For example, water (H2O) has many varieties depending on which of the three hydrogen isotopes are involved, the size of the loosely held molecular groups called “charge clusters”, the frequencies both subtle and gross that can be imprinted on and held by water, and the way water is structured, etc. Water is an absolutely key ingredient in producing Life as we know it. Fractal Water, LLC. has developed technology, called the Super Imploder, which treats water to both support and enhance the Life Quality in seeds and plants. It has two parts; a phase conjugating magnetic part and a centripedal implosive part.

What is Phase Conjugation?

As modern physics is discovering, everything is composed of waves: matter, energy in all forms, all Life, you, me, everything. The Universe is awash in waves that for the most part interfere with each other in ways which diminish and cancel each other out. Phase Conjugation is a wave phenomenon whereby certain conditions, geometries and magnetic arrangements etc., cause waves to strengthen each other as they come together by adding and multiplying each other. All Life, in order to be at all, is characterized by phase conjugation of a certain sort. Through our research, we have identified principles, aspects and factors affecting the kinds of order that enhance Life and have developed a magnetic array technology that can be used to bring about favorable phase conjugation in water which supports Life.

What is Centripetal Force?

TEST APPARATUS: THE IMPLODER – phase conjugate hydrodynamic NOZZLE is fitted to: A series of Neodymium Iron Boron magnets are precisely set in a unique design: “Phase Conjugate” position . Like poles of the magnet can actually attract each other. We utilize the enhanced ‘z pinch’ effect of our custom phase conjugate array.

Each of the individual magnets had a 1/2″ diameter hole at the centre to allow for water flow. The magnet array was attached to a diaphragm water pump which allowed for recirculation of water using a 20 Liter reservoir. Water was re-circulated for a period of approximately 15 minutes before measurement or experimentation.

Redox Results – After circulating water through the new air-core magnet stack encased in copper tubing for 8 minutes, there was a noticeable 6.5% drop in Redox potential of the sample compared to the control. This is advantageous for drinking water since a lower value in Redox potential is healthier. There was also a 5% drop in pH from the control value of pH 8.0 to 7.6. The ORP (redox potential) readings were as follows:

Measurements were made in reference to a saturated Ag/AgCl calomel electrode.

GDV Entropy results– Ordinary tap water (15L) was re-circulated through the magnet stack for about 15-20 minutes. A sample of this ‘magnetized’ water was compared to the original tap water prior to passage through the magnet stack. The two samples were analyzed using the Kirlionics GDV device with the water attachment plate which was submerged in 1 Liter of water in a glass beaker. The results, shown below, indicate a 46% reduction in entropy of the magnet water compared to that of the tap water. 100 data points for each sample was taken for the measurements. 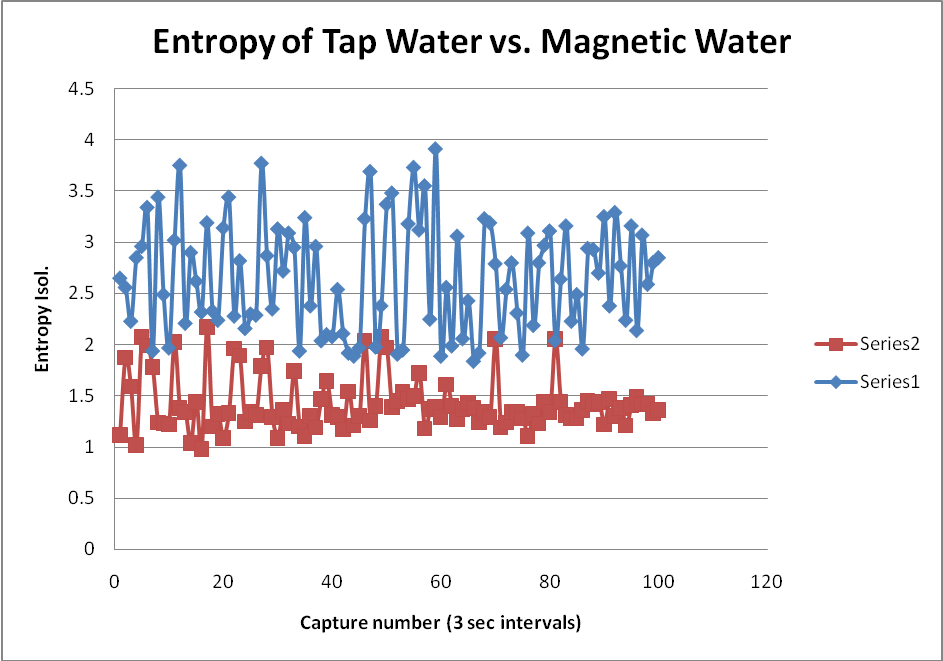 Germination Results– Two individual germination studies were conducted using mustard seeds. In the first experiment, 25 mustard seeds were planted onto a square cotton mat inside of a shallow plastic container about 7 inches in diameter and 1.5 inches in height. For each experiment three dishes were set up prior to planting. One was used for the control water sample and the other two for the magnet water sample. In the first experiment 25 mustard seeds were planted in each dish and 50 ml of test water was added to each dish. The dishes were covered initially with paper towels and the evaporated water was replenished periodically as needed. After 7 days of germination the seedlings were weighed on an analytical balance to the nearest milligram. The results showed an average increase in germination yield of 12% with the magnet water compared to the untreated tap water. A second experiment was conducted in a similar manner except that 30 seeds were used in each dish and the dishes were covered with plastic wrap to avoid evaporation and subsequent water replenishment. The plastic wrap was ideal since the initial water charge of 50ml was more than enough to keep the seedlings moist over a period of 7 days without having to replenish the water. The results of this study showed a much more prominent effect with the average germination yield of the two magnet water samples at 25% greater than the control water sample.

Plant weight increase in response to phase conjugated water: over 300%

I weighed the plants and placed them in sealed plastic bags for shipment for more tests. The weights were: