Testimonials Our customers love our products, hear what they have to say about us.

And – as so many people have subjectively reported- with the IMPLODER- that the chlorine smell in the shower is virtually gone..

so we had a lab test done- which DID CONFIRM – dramatic reduction in chlorine using the IMPLODER: – here the result of the independant test: 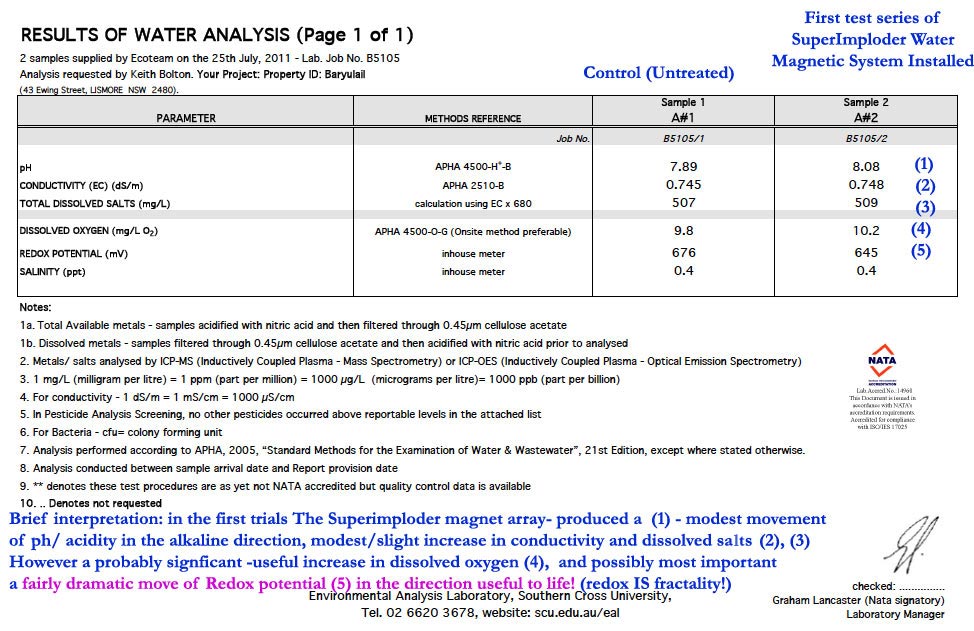 Grass Seeds- Would Not Germinate-Then Fractal Water Super Imploder Solved the Problem (picture) –
on July 19, 2014 – Yves Van Assche – from Belgium wrote: “Hello Just noticed the first extreme result from the Fractal Water Super Imploder combined with the triple vortex …. My son in law had put lawn seeds over a 10 m2 three weeks ago … he had less then 10% germination rate… he said the seeds were too old and had been too long in our glass house… When I hooked up the Magnetic combined with the triple vortex, I started irrigating the area … after 5 days of watering with the vortex we have now near 90% germination…!” (picture)..
Yves also wrote: (he then experimented..)..”sprayed the water over my arm and two miniutes later all dead skin came loose”… 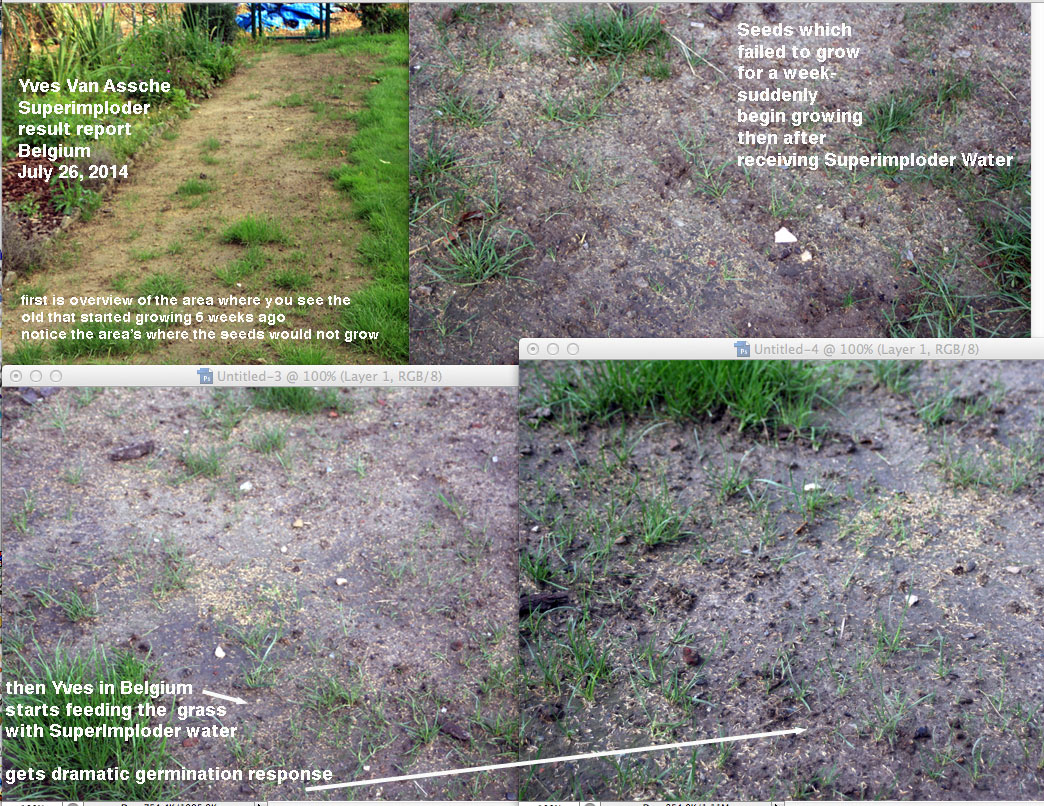 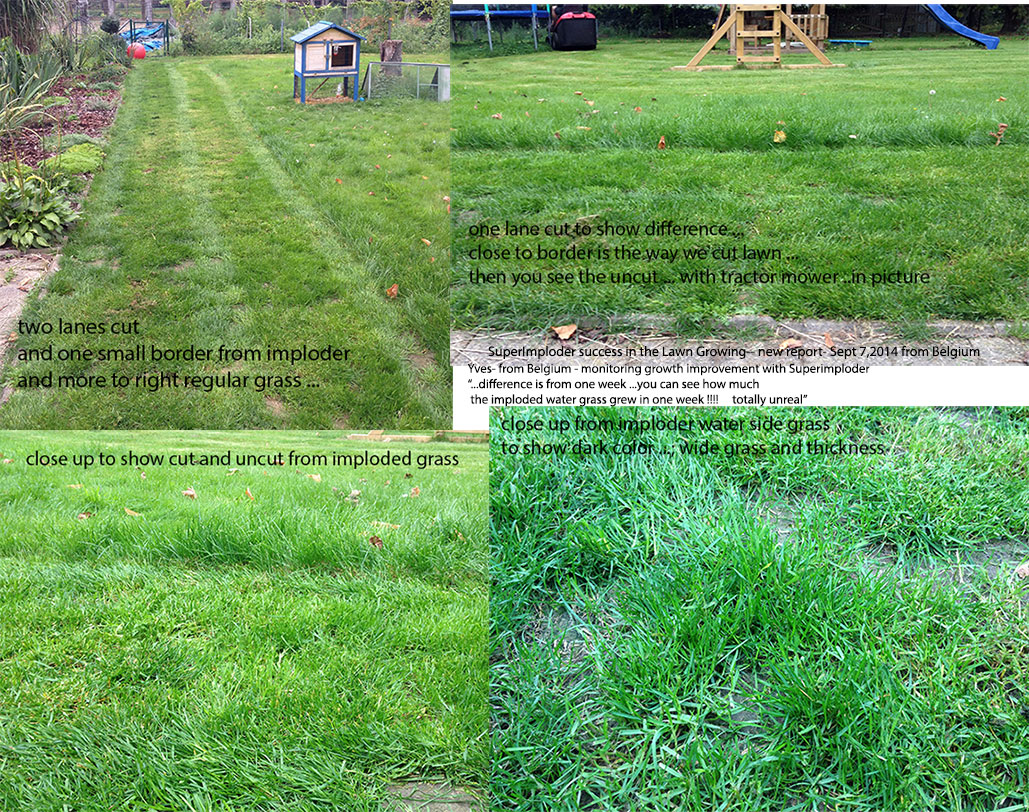 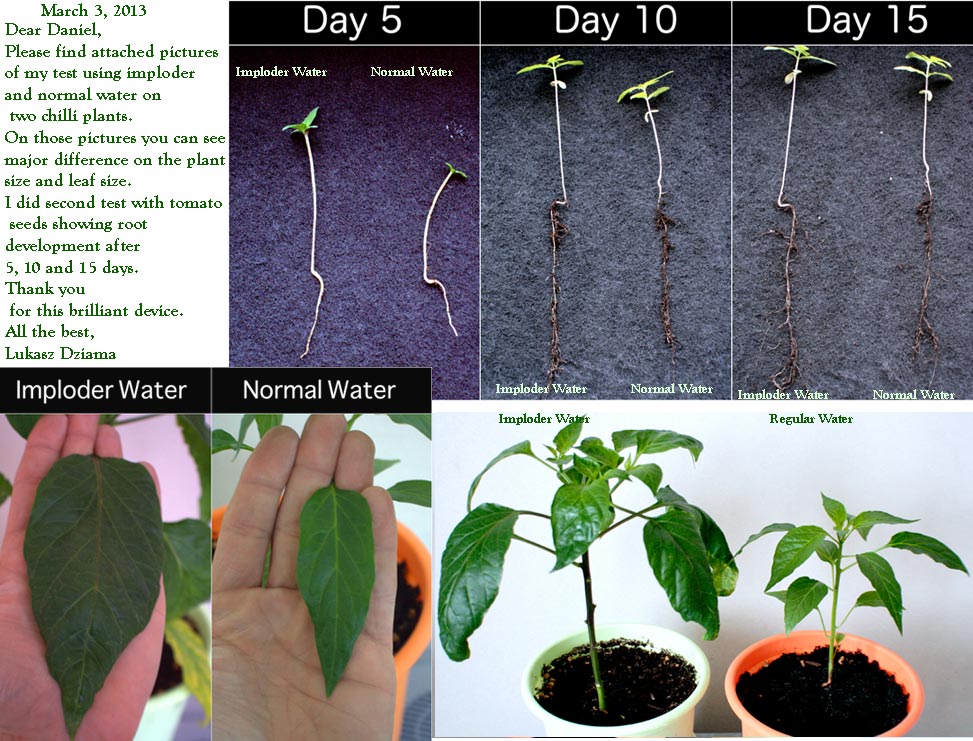 Tomas Z., Canada- report- with image set- Nov 19,2012:
“Hi Daniel, How are you doing, I hope everything is going well with you and yours. Everything is good with me and I have been enjoy the imploded water by drinking it and using it on my plants. The plants are noticeably healthier and more resistant…. As promised I conducted a comparison study and it clearly shows the benefits of the imploded water. I noticed that the plant was more efficient, needing less roots to absorb water. At the same time, once the roots were out the branching was very symmetrical and consistent. The leafs on the plant was more consistently spaced out. The plant flowered much earlier and was more resilient to drought. All in all, lots of improvement. Attached you will find an image, showing the 4 most noticeable changes in the span of approximately two and a half months. I have about 30 good images showing the different stages, I believe that this is a very good example of how beneficial the imploder is. I hope you like the study and the results.. . Best wishes, Tomas Z.”-pic below 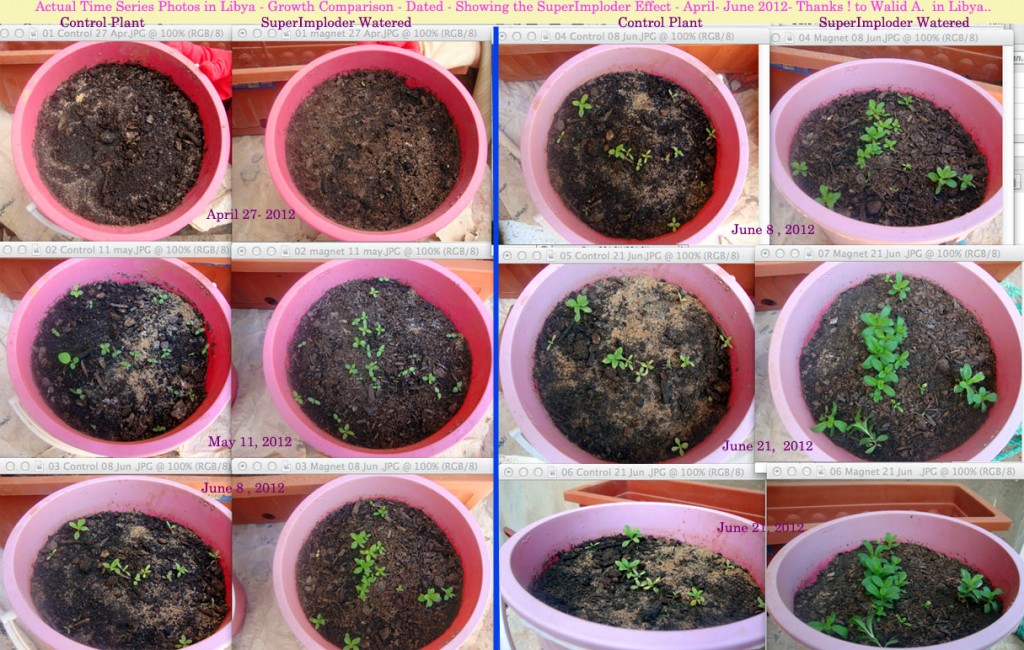 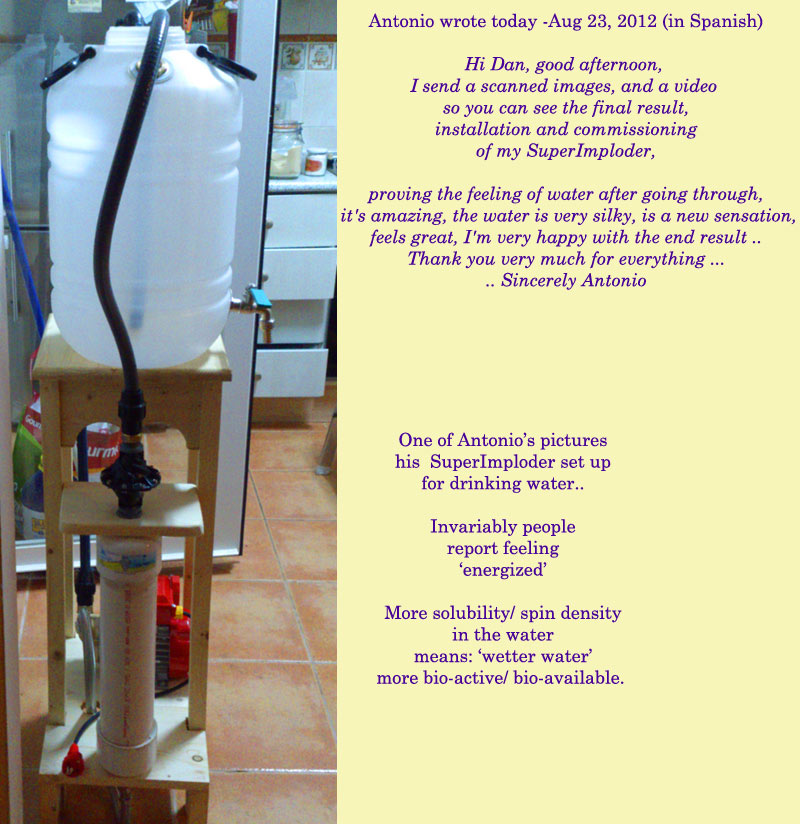 John C., wrote Aug 2012 – from CA, USA- My shower head and DVDs came 2 weeks ago and I’ve been using it. Love it. Water is definitely different and more lively. I just feel better after using it overall. I have some thoughts and experiences with the imploder for the month I’ve had it. Used it for drinking and my jacuzzi water. I have a 800 gallon jacuzzi 10 ft by 8ft so a decent size pool that will seat 12. The water supports more life energy, so much so that I was putting in the maximum amount of chemicals (bromine and chlorine) and the algae bloom would not die! This would indicated more dissolved oxygen in the water as well. The super imploder is not recommended for filling pools and spas or ponds because of the ease of algae growth. This is to be expected because your products are intended for plant growth and sustaining life. It definitely overcame the chemicals I put in to keep the water clear which is exciting because it seems the proper use of this product will overcome a polluted environment!Bathing and drinking in the water, even just soaking my feet produced a overall feeling of well being and clarity of thought. My head would ring quite loud and the world in general around me seemed sharper and more defined. I just feel more aware and alive. Very cool! It should be noted that all water at my house is treated through a whole house (waterboy) water filter and is already purified and softened through their proprietary technology which I believe is the healthiest and best out there available right now. So my water is purified through the Waterboy and then structured and energized by the super imploder. I also took the time to water my sago palms and basil plants and the plants simply loved it. One sago that was not doing as well as the others (brown and yellow areas and slower growth) perked up noticeably and is now a healthy vibrant green. My basil seems more fragrant and stronger tasting. it should be noted that no nutrients or chemical fertilizers have been added to my plants in over a year! I only watered maybe 6 times in two weeks at the most.

Thomas G- wrote Aug 7,2012: from CA, USA- Hello Dan and Roger, > Thanks for the latest news on the Imploder. A while back I purchased an Imploder from Dan and it is now installed on my home farm located in Georgetown, California. I’ve enclosed a photo. The device is fantastic. I am growing vegetables on poor quality soil and getting great results. All the plants are incredible pest free as well.
> When I purchased the Imploder from Dan over a year ago, I promised him that I would send a photo after I got it installed, so I want to be sure he gets it. (above) – I met Dan in Calgary, Canada almost 2 years ago, so I hope he still remembers me. I’ve been very interested in his work since then, not only from a scientific interest but from a spiritual as well.
>> Thanks again for all your work on the Imploder. > Sincerely, > Thomas G. 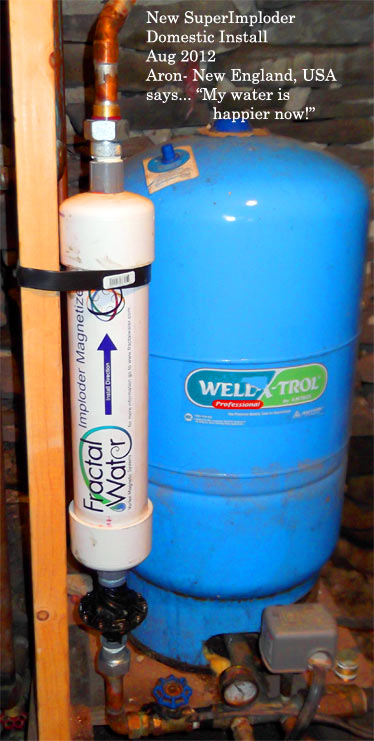 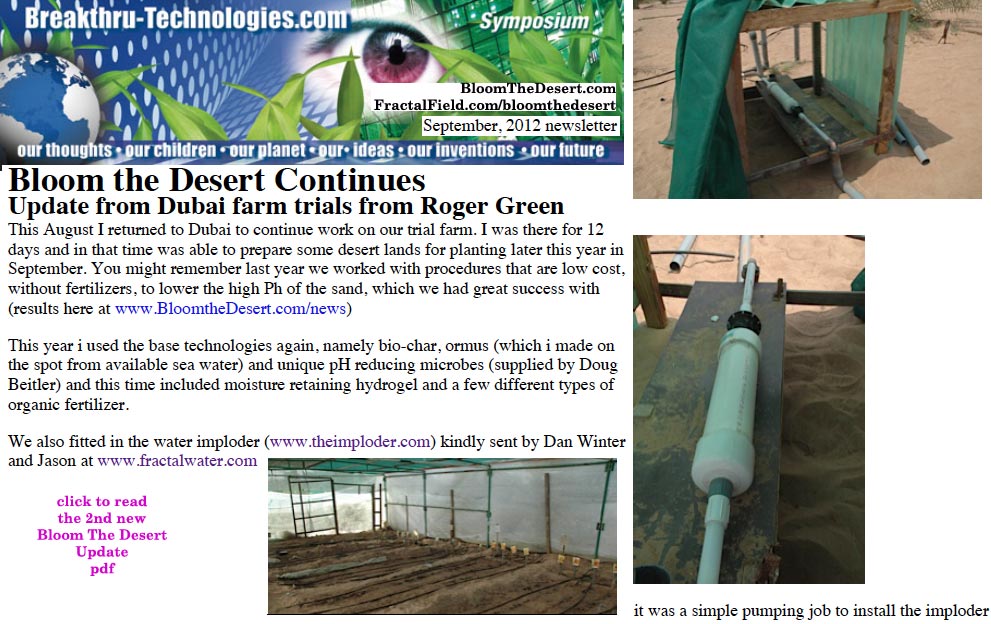 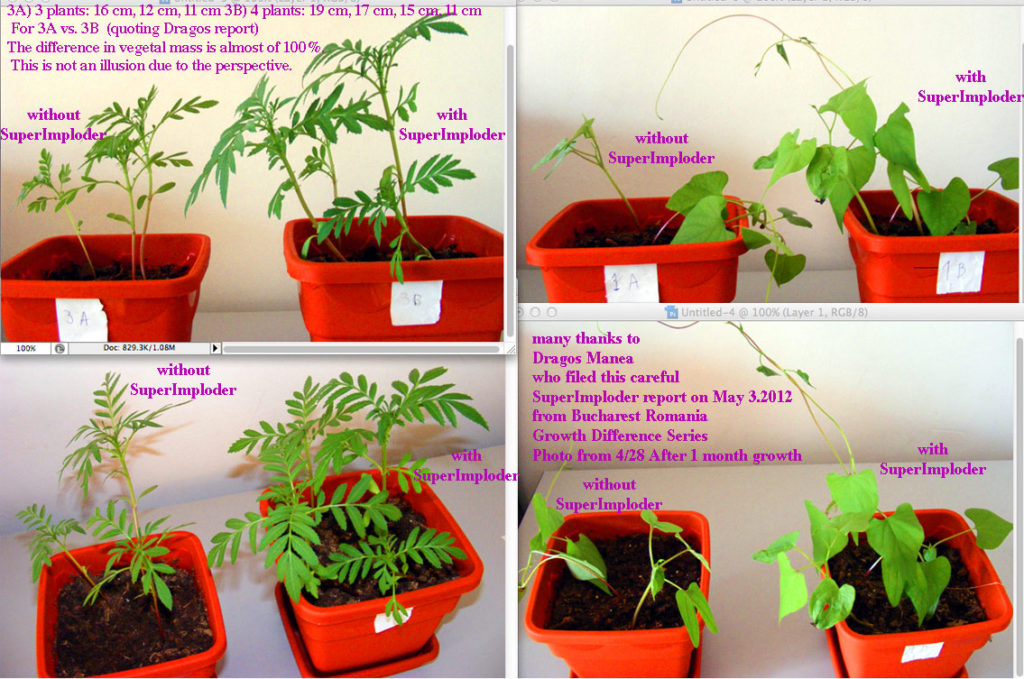 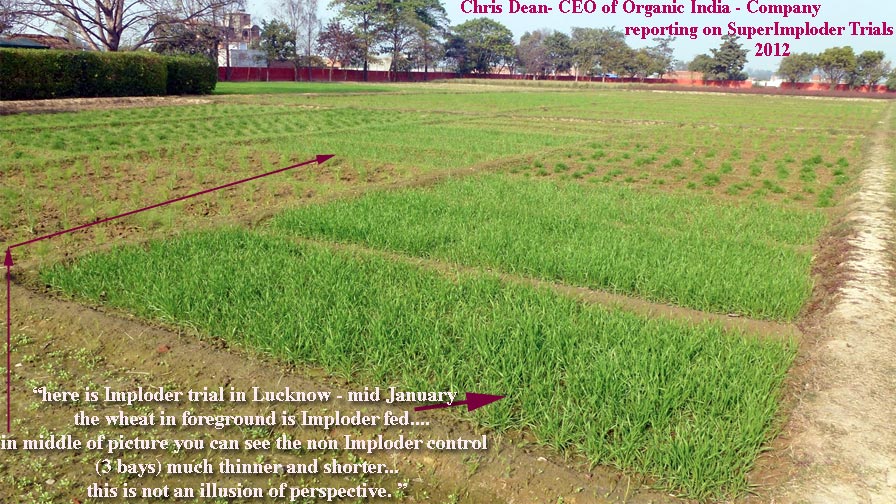 Report: Dec 30, 2011 Jason Matozzo, www.fractalwater.com
testing SuperImploder –The design of the new SuperImploder- is specific – in that the original Imploder served germination phase growth more than fruiting phase. To prove the new design – in HYDROPONIC environment- just as the plants approached – fruiting phase- (same plant type, soil, environment and water amounts)- one comparison set of pepper plants were given Superimploder water to compare.

“The pepper plant on the right was treated for 1 week with magnetic imploded water, started to bloom after the first week in flowering. The pepper plant on the left we used regular water, three weeks into flowering and we are just now starting to see peppers form. Unofficially, the imploded water cut two weeks of transition from veg to bloom phase. Further test will continue.” – Chris Always Sunny Hydroponics

The following new un-retouched actual time lapse photography – of the

was made by Jason Matozzo, Connecticut, USA- working with the SuperImploder – at www.fractalwater.com
You can contact Jason in New England, USA about his Imploder work: [email protected]

Sacramento, California – Neil W. letter Nov 8, 2011: (quote)- Salutations Dan, I hope this email finds you well. I wanted to thank you again for agreeing to the discount on the Super Imploder and give you an update on my findings so far.

I bought two identical plant packages and used the imploder water on one and tap water in the other. The first thing noticed was that the imploder water absorbed the soil in about 1-2 minutes, leaving the soil looking moist & fluffy and the tap water absorbed the soil after about 30 minutes. Even after 40 minutes the tap water Was not completely absorbed and made the soil into a sloshy mud. Both plants are placed in the same soil, same sized pot and in place in the same sunlight. The only difference between the two is the water.

Day 1) Tap : no significant change in growth. Looking a bit more brown. Imploder: immediate noticeable growth of 1/4″ – 1/2″. Plant is noticeably greener , straighter and has a new patch of red on the stock.

Today Day 7) Tap: growth of 1″. Slightly greener but still has some brown coloring , new red patch on stock, growth of two new stocks sprouting On the base. Imploder: growth of 2.5″. Two new stocks spouting from base. Bright green and much straighter than the other. So far the the plant with the imploder water has double the growth compared to the tap water plant. Very impressive !

I have been taking pictures to document the results …(here they are):

New- Neal added up to day 14- look at the difference in the update pic below! 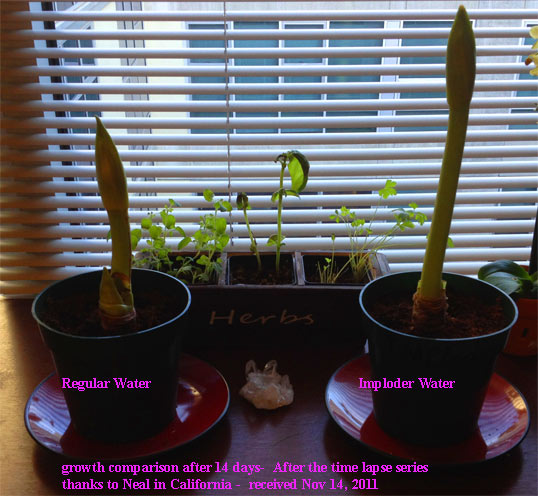 Finally .. on Nov 25, 2011 Neal from Sacramento, California sent
the climax photo from his SuperImploder growth compare.. his word: “Unbelievable !” 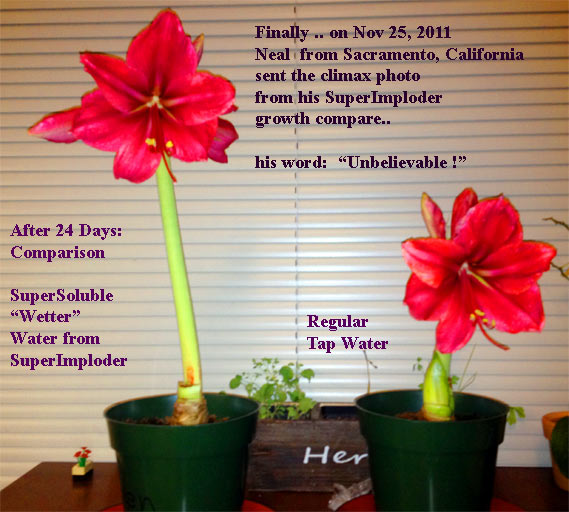 “I (Neal) also froze two cups if water to see if the water looks different and the imploded ice had fewer cracks, less lines, and was noticeably clearer 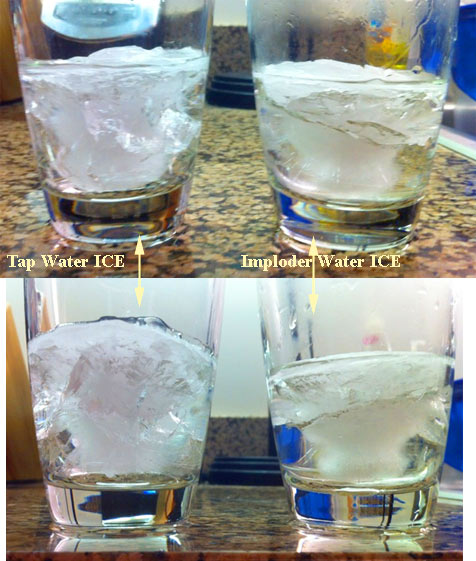 Bath: In the bath the water has a “silky” feel to it very similar to how conditioned “soft water” feels. Soap, shampoos and hair conditioners are more effective and skin is noticeably softer. The imploded water also does not bead up on the skin like tap water and appears to be absorbed more efficiently by the skin.

Drinking : The smell of chlorine is removed and tastes much better. It’s almost as if your body is saying”Yep… That’s the stuff I like”. Tea and coffee Taste much much better. The flavor of the tea comes through the water and you can even taste the individual favors if each type of leaf but the coffee is what really blew me away. The coffee tastes much smoother and much less acidic. Honestly I would recommend that someone purchase an imploder if it was only for this one reason ……tasting The worlds best coffee.

Another thing that I do not know how to document but thought it is definitely worth mentioning is that after drinking the imploder Water the first night, I felt like I had much more energy and I woke up much earlier than normal because I had so much energy. Even with less sleep I felt more awake and clear headed the next day. Just looking at the difference in the two plants really makes me wonder what a huge beneficial difference it would have on humans.

We also live very close to Napa and Amador which are both known for wine and grapes. My fiancé is close friends with _______ vineyards and I think that they would greatly benefit from using imploder water on the wine grape crops. I would be very interested in getting involved with selling your imploder as there are large potential markets for it plus I think selling the Imploder would earn me some good karma points 🙂 Do you have anything in the pipeline (sorry I couldn’t resist the pun) for agriculture or other markets? Respectfully, Neal W. (end quote) 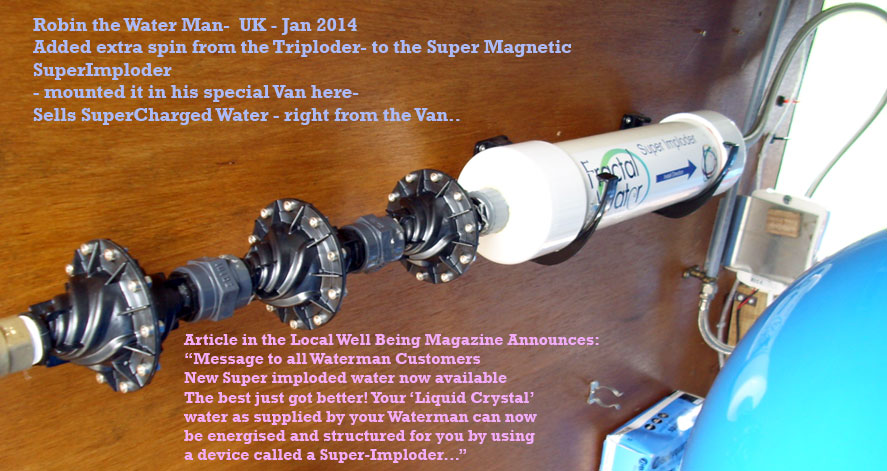